Dear all,
As you might know I am working in Masanga Hospital since the beginning of this month. Masanga Hospital has about 105 beds, divided over a surgical ward, male and female side (but here also the medical cases are being admitted), paediatric ward, stabilisation centre (for malnourished children), and a maternity ward (were also the waiting mothers are staying). There is an OPD, under-five clinic with antenatal care, a laboratory, dispensary/pharmacy, X-ray department and …. of course a theatre.

I would like to try to send you a short story from Africa once in a while.
Just before I left Makeni, the bigger town, I wanted to convert my driver licence into a Sierra Leonean one. I was lucky as one of the drivers of Magbenteh could join me, as I did not know exactly where the road traffic department is. We drove into the road and asked, as the driver was also not sure. Some men under a tree were friendly and pointed out that it was just a little further down the road. There we found it, but there were several offices, most closed. After being directed to the road traffic office, I was told by the young men that the officer (in change of the driver’s licences) is out, so I should come back later. When I told the driver that he told me that that officer is the one that showed us the way… So we went back to the tree and explained what we came for and then the man would come with us. As I had inquired before I had all the required items (passport picture, copy of driver licence and passport with work permit and of course money) An other person to write me the receipt was not there, so I had to come back later for the receipt. After about 10 days I can collect my drivers licence.
This actually went quite smooth. The next day they were closed before I could come for my receipt, but on Monday I got it. Now I am in Masanga and did not have a change to collect my drivers’ licence, but it should be there, and I have the receipt!
This week we (all clinicians) were in the conference room for morning handover, when we heard a motorbike drive up the hospital compound, nothing unusual, but just after that there was quite some noise from the direction of the ward. From were we were we could not see what was the problem, so one of us, dr Thomas Asley went to see.
Not much later an other 2 motorbikes came with even more noise. 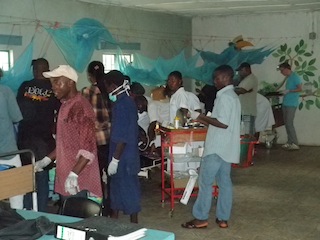 All of us went there to assist. It had been a frontal collision of two motorbikes (each carrying 4 people), so we had 8 casualties. The ward is very full, so that would not work well, so immediately we (dr Alex and me) decided to get all of then in the ward for the stabilisation centre (were we had enough empty beds). That showed to be a wise decision as now also we could keep a very large crowd of curious people out. All present staff assisted: they were assessing patients, making chards, suturing cut wounds and giving painkillers.
It seemed no one was wearing a helmet and 3 of then had a brain contusion: “what happen?” one repeated about every minute, despite the fact that he was told.
In the afternoon 2 could be discharged home, the others stayed for the night and some even a bit longer, as they also had other problems which made them take the bike to the hospital…
Even though it is not according to Western standards, I think every one did a quite good job.
I hope the plans for an emergency room (renovation of the part of the hospital near the entrance of the hospital and next to the X-ray) will be realised. That, together with some more training/practise, will make the trauma care to be fairly good. 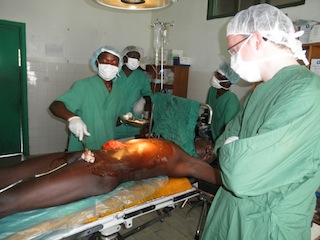 The next day when we were operating dr Alex was called to see a patient, he got a knife in his abdomen and now his bowel was coming out. Immediately he assessed and stabilised the patient got the Hb checked and informed the theatre. Very quick he was taken to theatre and his abdomen was inspected: he only had a haematoma on his mesenterium (part in the abdomen that takes the blood supply to the small bowel), there were no other injuries! His abdomen and wound was closed and he recovers well in the ward. He still does not tell a convincing story about how the knife got in there…
Oke, enough stories for today, hope to write some more later.
Many greetings from Masanga,
Erdi Huizenga