Hurray! The ward of LHMC is –unofficially- opened

Since you can never be 100% ready and we do have to start once, the nurses started their calls this Monday. So instead of all coming at 8 am in the morning, only the normal OPD staff and Beatrice and Beatrice came. They were the first morning shift for the ward. No patient to take care of, but one might come from OPD if needed admission. So they made sure they were ready and cleaned the ward once more. At 2.30 the late shift came: Abdulai and Isha.  It was almost 6 when I left the hospital with the thought: “Even if no patients, it will still be a good to get used to shifts and to the ward”. But, during dinner I was called by Abdulai: there was a new patient, quite sick. He was trying to take the vital signs, but there was no BP machine in the ward yet. Quickly finishing diner and together with Maria Singo I went to the hospital. An elderly man was lying there in the examination room, weak and with fever. I collected the BP machine and extra papers from the OPD, so we could admit the patient.  We started a drip and other medication, collected from the dispensary.

Our first admission is a fact! 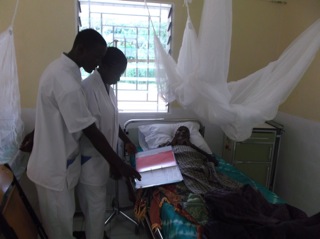 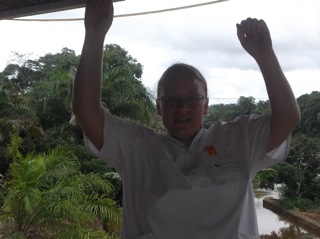 In the mean time the night shift, Janet and Osman had arrived. They got a handover – Abdulai starts our handover book. After that all leave and Osman and Janet stay in charge of the ward. At midnight I made an extra check, but all was going well: the drip was running and the patient was sleeping. With instructions and a phone to call me with any problem I left them again. Early morning it was time for medication again, so I went to assist/supervise. -Oeps, this is a bit tiring, but will have to keep it up for now- At 8 am the early shift and the OPD staf came. All of us crowded in the nurses station and Janet gave the first LHMC morning report: Good morning. Morning report of 24 July 2012……   It is still a long way to a good running hospital and we need everybody’s support to get there, but today I really felt being part of real start of something good. It looks like the nurses have the same feeling, they are so eager to work and learn.