This statue is inspired by and dedicated to the late doctor Erdi Huizenga and to all those other courageous and passionate people who work for the well-being of humanity without self-interest. 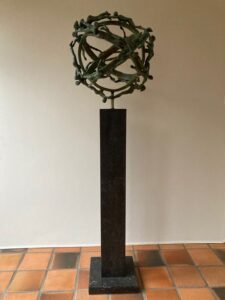 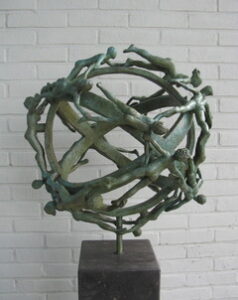 This bronze statue is created
by Henk Vos
and based on the following story;

“In 2014, Ebola doctors Erdi Huizenga and Nick Zwinkels were repatriated from Sierra Leone to the Netherlands because it was suspected that they were infected with Ebola. Both doctors worked in Sierra Leone for the Lion Heart Foundation and ran a regional hospital where, in addition to their duties as doctors, they trained the local population to become Ebola nurses.

After both doctors were quarantined in Rotterdam for some time at their own request, it became clear that there was no contamination. Because the insurance company did not want to pay again for a possible repatriation, no money or insurance was made available for the return to Sierra Leone. However, Erdi Huizenga definitely wanted to return to Sierra Leone and her hospital because the population there was totally dependent on her. “For them it’s a matter of life or death and I can make the difference.” said Erdi Huizinga. And so Ms. Huizenga decided to return to her hospital in Sierra Leone at her own expense and without insurance.

After working for the Lion Heart Foundation for a while, Dr. Huizenga transferred to the City Garden Clinic Hospital in Makeni. In 2011 she founded and has been a board member with the Smarter Hospital Foundation. Dr. Erdi Huizenga passed away unexpectedly in January 2020”  Henk Vos November 2021

If you are interested in getting this statue in your possession or if you would like to adopt a human figure on the statue, for example, you can contact our foundation via info@smarter-hospital.nl. A large portion of the donation from the statue will be donated to the Smarter Hospital Foundation and a small part of it will go to the creator Henk Vos for used material. All donations will be used for the Erdi Scholarship project. Details can be found via this link